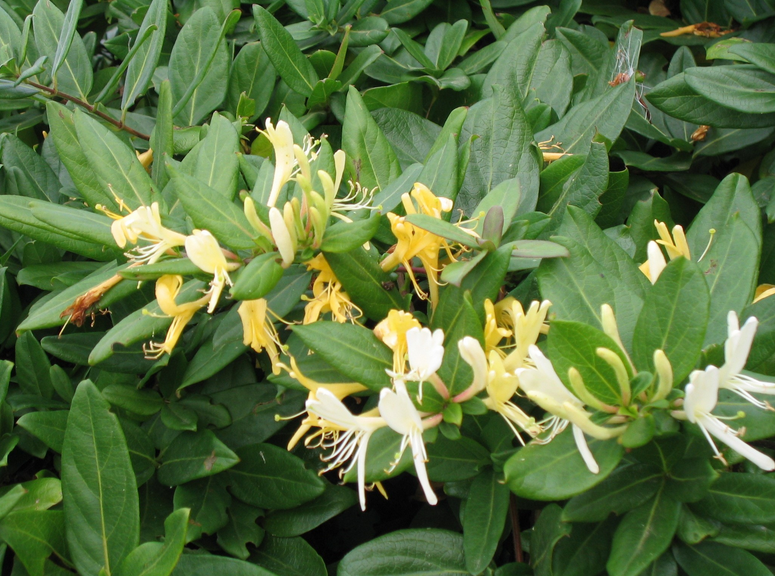 This is original package of Japanese Honeysuckle (Lonicera japonica) commonly used for making beverages in traditional asian medicine.
Japanese honeysuckle – called in Japan Suikazura and in China Jin Yin Hua (‘Gold-silver flower’) is a species of vine originating from East Asia, with strongly and sweetly scented flowers. It grows very quickly being able, in natural conditions, to climb trees to a height of 10 meters. It is also a natural food of deer, hummingbirds and hares.

It is highly valued in the natural Chinese medicine, it is ‘cold’ herb which treats fever, sore throat, stomach, ulcers and eliminates toxins from the body. It is gentle for the stomach, therefore it can be administered in fevers to people with sensitive digestive system.

Its effectiveness is also confirmed pharmacologically. Japanese honeysuckle contains chlorogenic acid which reduces the absorption of sugar, thanks to which the body actively derives from supplies accumulated in fatty tissue, so that it burns excess weight easier. Chlorogenic acid is also very powerful antioxidant having an antibacterial and anti-inflammatory effect. That is why, it is sold in some countries as a supplement of diet in an isolated form. It also contains beta-sitosterol and stigmasterol with a similar effect, additionally reducing cholesterol.

To prepare drink, put a teaspoon of leaves into a cup and pour almost boiling water over them (temperature of approx. 90 degrees C). According to the Chinese tradition it can be steeped twice or even three times obtaining a different flavor.

This is the originally packed holly (Ilex Latifolia) known in China as Kuding or Kuding-cha, a packet of genuine Chinese holly leaves used for the preparation of popular hot drinks in Asia and in the natural Chinese medicine. Its taste is similar to tea but it is not a tea. Its taste is intensely bitter and it has a lot of well-documented health benefits being among others a source of triterpenoids, flavonoids and essential oils that you can also get from Aliexpress.

The holly properties were described for the first time in Antiquity in the book ‘Tong Jun Lu’ in the 25th year A.D. It was supposed to have a bitter taste and keep people drinking the brew in activity throughout the night. In the compendium ‘Ben Cao Gang Mu’ from Ming Dynasty, holly was described as plant with no toxic properties, stimulating the body and mind and quenching thirst.

These properties have been confirmed by modern research confirming the existence of flavonoids, triterpenoids and essential oils in the herb. Among the many beneficial properties it is supporting fat metabolism, cardiovascular system protection, antioxidant activity, anti-asthma activity and anti-cancer activity. The results of research have been developed in the American scientific journal – Journal of Natural Medicines and together with a table of the chemical composition of holly are available on the website.

This is a pack of genuine jasmine dried Aliexpress flowers, originally packed and used in the preparation of popular hot drinks in Asia and in the natural Chinese medicine. This is not a blend of teas flavored with jasmine but pure jasmine which can be consumed as a drink or you can add jasmine flowers by yourself. It is whole jasmine flowers, not only finely chopped petals.

In the Chinese tradition, jasmine is the pure plant that ‘lets you feel the first breath of spring’. This is due to its very pleasant flower aroma that brings to mind a meadow.

Matcha Tea originally came from Japan and are among the most valuable teas. Matcha is powdered green tea, harvested from young tea leaves with an extremely clean taste and aroma, used in tea ceremonies. Unlike Pu-erh, natural matcha doesn’t have any additions and it’s taste is very clean and distinctive. Its health benefits are numerous, and as some claims it is Japanese secret to longevity. We recommend original Japanese matcha tea from Tiger Tea store.

Jasmine especially goes well with green tea, white tea or black tea and you can create from it your own recipes. Jasmine also goes well with mint as well as with grated ginger, allowing to make great drinks. Jasmine flowers are also used to make exotic drinks mixing them with gin or rum.